We Are Milton Construction Company, LLC

When you call us with your renovation ideas, our primary aim is to listen well and ask questions to help us understand your desired results.

If it becomes evident that Milton Construction would be a good fit for completing your project, we will then enter the design phase. During this phase, we work with you to finalize details for your project, after which we will present you with plans and a firm price proposal for the work.

We strive to do as much of the planning work as possible up front, so that once the job is started it can run along smoothly and be completed in a timely manner with as few delays as possible.

We would be glad to listen to your ideas, answer your questions, and explain to you our design process and how we work

Todd is the Owner of Milton Construction. He grew up working summers with his Dad and gained a familiarity with all things associated with construction. He is a graduate of Radford University (1996 – BS Psychology) and spent several years working in Radford after graduation, where, after purchasing a house built in 1893, his interest in renovation work was rekindled.

While he still very much enjoys working on the jobs with the guys, most of his time is spent meeting new customers, designing and estimating new projects, and other necessary tasks that come with running a business. Todd enjoys living in Appomattox with his wife and family. His hobbies include reading good books, gardening, and hiking.

Tom has been married to his high school sweetheart since 1992. He loves animals and the outdoors—especially enjoying hunting, fishing, and four-wheeling. He has been working in construction for over thirty years, both commercial and residential but he prefers residential as it gives him more opportunities to be creative and do more unique work for homeowners.

He specializes in kitchen and bathroom remodeling, including cabinet installation, tile flooring, backsplashes, and showers. He is also rather proficient at drywall and painting. He is well rounded in all aspects of building construction from foundations to roofing and has been a great addition to the Milton Construction team since 2014.

Domenic has been a valuable member of the Milton Construction crew since 2011. He grew up traveling overseas and finally transplanted to central Virginia from Manassas in 2006.

Domenic was originally trained as a cabinet maker before transitioning into remodeling. His skills as a carpenter are well rounded and versatile. He enjoys living in the area with his wife and four children.

Cory is a carpenter with Milton Construction. Born and raised in Appomattox County, Cory’s interest in woodworking began in middle school. He has always enjoyed discovering how things work, problem-solving, and designing creative solutions. Throughout middle and high school, Cory acquired skills in both woodworking and mechanics.

Together with his father, he built a reproduction General Store, along with a small woodworking shop where he further developed his craft. He also participated in numerous competitions and skill-based events as a part of Future Farmers of America (FFA).

After graduating from Appomattox County High School in 2014, he began working with Milton Construction. He and his wonderful wife, Dani, have a daughter named Emmy, and together they enjoy visiting gristmills, restoring tractors, bluegrass music, and beekeeping.

Jesse is the latest addition to the Milton crew in 2019 and has really learned a lot and enjoyed working with the team. Jesse was only 19 years old upon joining; but the third oldest of 12 awesome brothers and sisters! Growing up in Concord, Virginia, doing homeschool and working on the farm, he has always loved building things, gardening, and tending to the farm animals.

Jesse is a graduate of Virginia Technical Institute where he sharpened his carpentry skills and grew in construction knowledge. He is married to his gorgeous wife, Rebecca, and they have a growing family of three little ones. He enjoys his garden, his goats, running, bluegrass, playing music with Rebecca, and spending much time with the family. 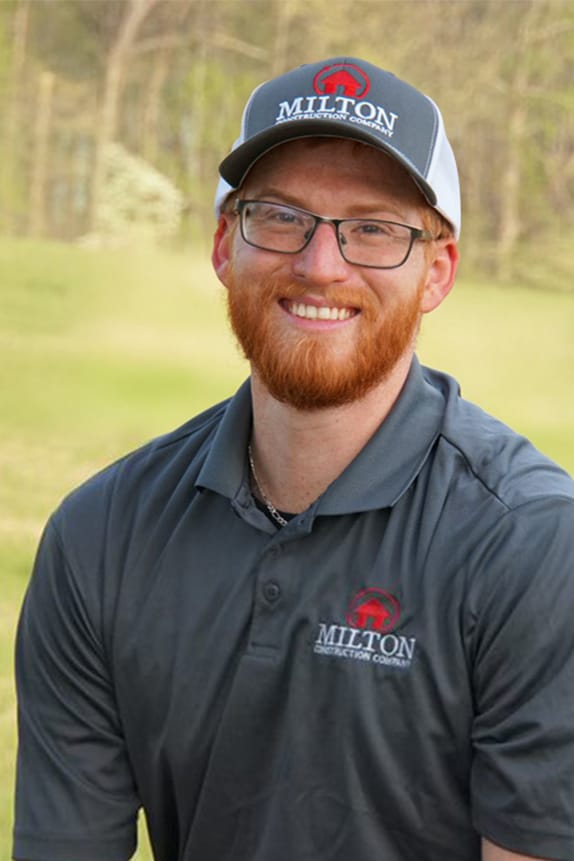 Nick recently started a new career as a carpenter with Milton Construction in 2021. He lives in Appomattox with his beautiful wife, Nikki, and their energetic 3-year-old son, Jaxon.

When Nick isn’t at work, he likes to flip houses with his wife to continue to sharpen his carpentry skills. Originally from Georgia, Nick stayed in the area after graduating from Liberty University (2014) with his BS in Criminal Justice and Forensics. He usually works on the finishing crew but is versatile and willing to do any task required.